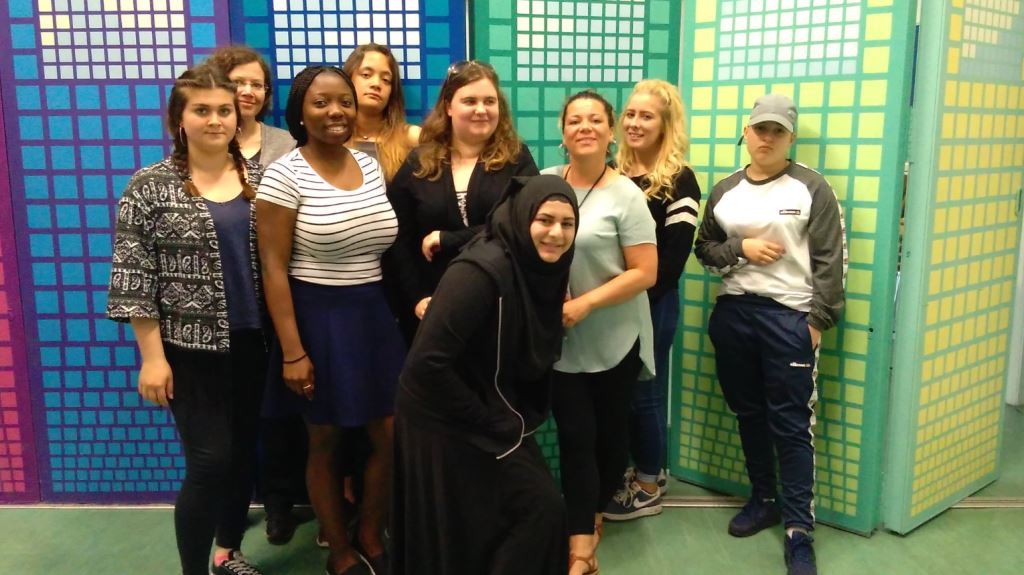 Departmental research teaching young women from non-traditional backgrounds how to code has led to more than newly developed programming skills for its participants, thanks to department academics Niall Winters (Associate Professor in Learning and New Technologies) and Anne Geniets (Research Fellow), with several young women from the most recent cohort who previously showed low participation in higher education going on to undertake further qualifications and training.

‘Go_Girl’ first began in 2015 and was initially run in partnership with Oxfordshire County Council’s Early Intervention Service to help widen and create a fairer access to the University in Oxford. Now in its third year, the programme has helped more than twenty young women in Oxford by training them in research, presentation, media production and IT skills, whilst also empowering the young women, broadening their aspirations and helping to determine their future career paths.

Pupils from the most recent cohort reported:

“Participating in the programme, made me have a wider perspective of what I could do instead of working in retail for the rest of my life.  The programme gives you that hope that you actually don’t have to be what everybody always said you were going to be.  I didn’t want to be that person who wasn’t going to go anywhere … but this gave me more of a push.  It’s made me more independent to make my own decisions.  All the women that are here decided to come because they want a better life.  It’s like you’ve come from somewhere far away to somewhere you’ve never been before and taken that leap even though there is a possibility that it might not work out.  To put on your CV that you’ve attended something like this when you didn’t have to just proves that you’re willing to do something new and different.”  Rebecca, aged 18.

Before joining the programme, Rebecca was not in education or in employment. She has since enrolled in college to complete her GCSE in English, found employment in retail and most recently been accepted to join an NVQ3 in Business at a college in Oxford.

“Participating in the Go_Girl programme made me more confident and I know that I’m not alone … I’ve got contacts [now].  The project shows that I can code.  I can design a game.  I can make a model.  I can design all the aspects of a game. The best thing was the guest speakers.  Everyone came from nothing but they didn’t give up.  They kept trying and look where they are now.  Coding has kind of changed my ways.  I changed my career path to designing games … because I enjoy making these fun adventures and I feel like the skills I have could match to it.”
Jay Jay, aged 24.

Since completing the Go_Girl project Jay Jay has been accepted onto a Masters course for Games Design and Development at the National Film & Television School, where she hopes to continue to further develop the demo that she created whilst on the Go_Girl programme into a full game.

“It’s really helped me feel comfortable when talking because I never used to feel comfortable or confident doing anything like this.  You guys have been helping me with my future.  I learned coding.  That was really good because it’s something that I wouldn’t have seen myself doing.  Most of the people who came to talk – that was really useful because they obviously came from nothing and kind of worked their way up and that’s useful to hear.  When we had to present, I wasn’t going to do it but I did it anyway.  You guys kind of pushed us to do it and it went really well.”  Haylee, aged 18.

Haylee plans to become a nursing assistant and then a nurse in the NHS.  She is currently undertaking an apprenticeship at a local nursery and attending college 1-day a week.

The programme’s weekly Go_Girl sessions for the third cohort of young women started this month. The project continues to draw on the expertise of an interdisciplinary team who a re part of the department’s Learning and New Technologies Research Group and the Department of Computer Science, who have experience in new media engagement of young women from non-traditional backgrounds, collaborative design, participatory action research, and the training in and development of coding skills.

This research was initially supported by the University of Oxford IT Innovation Seed Fund and has received subsequent funding from Goldman Sachs Gives.

To discover more about the department’s Learning and New Technologies group see here.