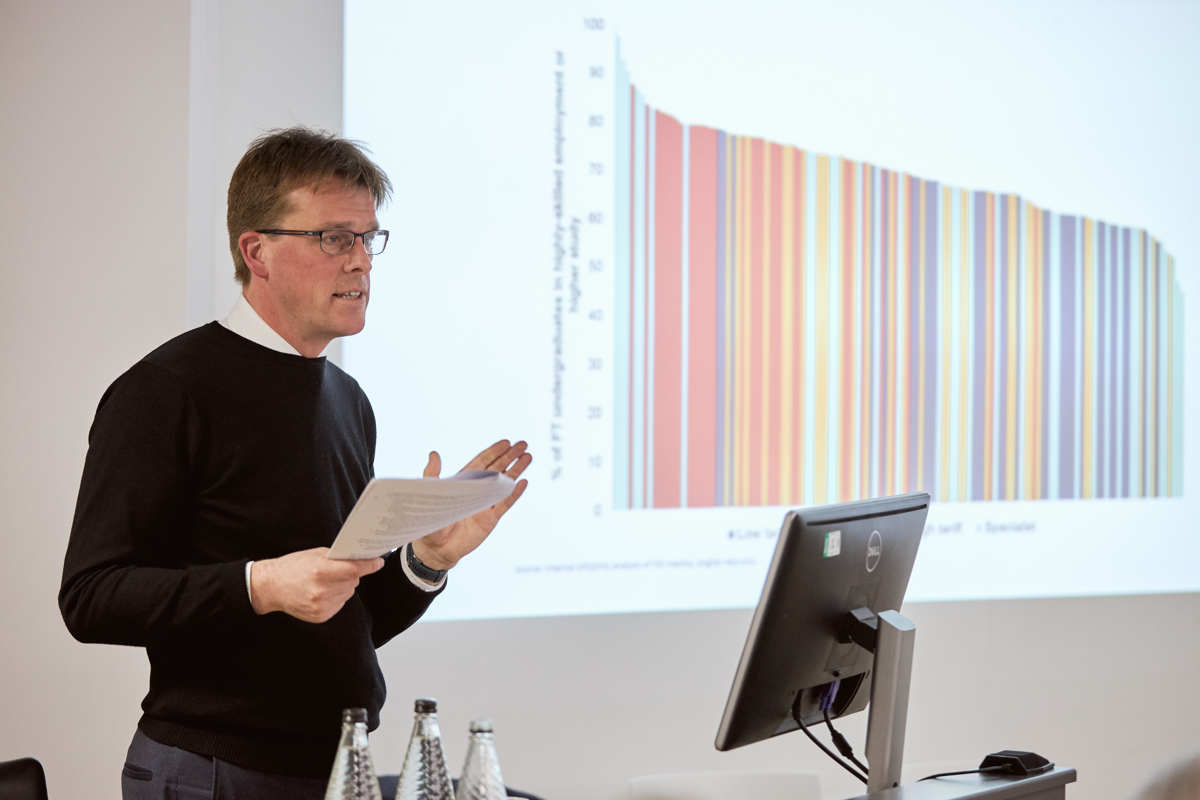 Judging by the size of the participant audience at the five sessions, the quality of the evidence-based papers and the stimulating conversation that ensued, the department’s Hilary Term public seminar series on ‘Student access to university’ were a great success.

The seminars, held between January and March at four Oxford colleges and the Department of Education, packed out every venue and covered seminar topics spanning admissions testing, the fairness of access in English Higher Education, postgraduate access, fair access via contextualised admissions, and access at the University of Oxford. There were successive attendances of 97 (St Johns College), 90 (Department of Education), 78 (Linacre College), 113 (Lady Margaret Hall) and 120 (St Anne’s College).

Discussion at the final seminar on ‘Student Access to Colleges at the University of Oxford’ on 4 March, chaired by Sir Ivor Crewe from University College, led by a panel of college heads and senior tutors from five colleges, and with a response by Lucas Bertholdi-Saad from the Student Union, ran almost 20 minutes over time and could have continued well into the evening. Perhaps the seminars attracted those most reform-minded, not those sceptical of changes to orthodox academic entry, but it is clear that at Oxford there are strong desires for a broader social mix, and determination to make that a practical reality.

This discussion draws together three elements not always well aligned in research universities: a high academic mission with no limit to the level of intellectual excellence, systemically fair access, and positive discrimination in favour of disadvantaged students. The seminar series, convened by the department’s Jo-Anne Baird and Simon Marginson, formed part of the department’s flagship 100th anniversary events programme and started from the premise that lasting advances in social access can be secured only through defensible changes to policy, process and mechanisms that are grounded in research evidence.

The first seminar on 14 January on admissions testing, led by papers from  Samina Khan (Director of Oxford Undergraduate Admissions and Outreach) and Jo-Anne Baird and chaired by  Rebecca Surender as PVC for Equality and Diversity, set the tone. Test preparation effects had been found in previous research and those from schools with a track record of making applications to Oxford performed better on some of our admissions tests. One of the core questions discussed at this and succeeding seminars was how to consistently identify the potential for high university-level performance among students coming from home and school backgrounds rarely associated with outstanding school-level results. It was also apparent that a key issue is lack of adequate individual level data when making admissions decisions. Postcode identifiers simply do not suffice as indicators of disadvantage.

Three weeks later on 4 February, at the second seminar chaired by PVC (Academic) Martin Williams, an attentive room listened closely to Chris Millward, Director for Fair Access and Participation at the Office for Students (OFS) as he delivered a reasoned paper that mapped inequalities at national level and set down the OFS reform agenda. The social and educational principles outlined in the Millward paper were endorsed by respondent Simon Marginson and generally agreed in the often lively discussion that followed.

The third seminar on 11 February, chaired by Nick Brown as Principal of Linacre College and led by Paul Wakeling from York, opened up the issue of social access at postgraduate level. In a university such as Oxford where graduate students are 41% of the total student body (the proportion in 2017-18), and where majority graduate study is a real possibility in the future, the question of access at postgraduate stage is crucial. This also suggests that the social mix at graduate student stage should become part of the policy discussion. At present OFS comparisons and targets focus on the undergraduate level.

During the seminar Chris Martin from Social Sciences Division also raised the issue of international students and access. We give little effective thought to the implications of either high fee international education or doctoral scholarship places for issues of social justice. The questions posed by Chris were not answered during the series but in a university as internationalised as Oxford they can scarcely be ignored.

The fourth seminar on 25 February, chaired by Andrew Bell from University College, heard Durham’s Vikki Boliver lucidly set down the case for a contextualised approach to admissions – the use of standardised metrics for adjusting students’ school-based performance based on indicators of disadvantage. Research shows that students with a bare pass from some schools can perform as well at university as students from three As whose schools and families provide a stronger starting point. This is transformative.

It was striking that the Boliver paper seemed to be agreed by those present. There was also much interest in Lady Margaret Hall (LMH)’s Foundation year initiative. Contextualised admissions, linked to a mix of preparatory/foundation programmes, plus continuing academic support, together have the potential to remake the access landscape.

Oxford is often painted in public as inaccessible, inhabited by the privileged and indifferent to educational opportunity, social mobility and democratic responsibility. But as the seminar series made clear, there is a strong access conscience in the University. From the University Offices to many of the colleges and departments there is a closely networked conversation about widening access and there is much discussion of systems, processes and metrics.

There is no doubt students from upper income quintile families dominate first degree entry at Oxford. Using orthodox selection methods, that outcome is inevitable. However, it seems very likely that in coming years the University will move forward on inclusion of severely disadvantaged students in the bottom quintile, the group targeted by LMH and others.

This is where the OFS policy also points. However, as as LMH head Alan Rusbridger remarked in seminar 5, a focus on the severely disadvantaged alone, the students for whom normal academic selection must be set aside if they are to have opportunities, may confine the scope for change in the student mix to small scale movement at the margin.

The more difficult issue is to tackle the mainstream mechanisms of existing merit-based selection – to transform the overall mix (especially the balance of quintile 2-4 students) to ensure it is more representative of the UK as a whole and brings in high potential students selected in a valid, credible and agreed manner. Neither the department’s access seminar series nor the OFS have yet answered that big ‘how’ question. However, there is no doubt the seminars have continued the momentum on access issues at Oxford. The next steps will be interesting.

Listen to the seminar series in full, here:

Access and Participation in English HE: A Fair and Equal Opportunity for All?, 4 February 2019
Simon Marginson, Chris Millward, Martin Williams